Nottingham-born short track speed skater and Olympic speaker Jack Whelbourne is as popular on stage as he is in the rink. His two greatest achievements to date are being part of the British relay team that broke the world record and becoming the 1000m Junior World Champion in 2011, two events that he discusses as a speaker. Passionate and witty, audiences immediately warm to Jack’s likeable nature.

Jack Whelbourne
Nottingham-born short track speed skater and Olympic speaker Jack Whelbourne is as popular on stage as he is in the rink. His two greatest achievements to date are being part of the British relay team that broke the worl 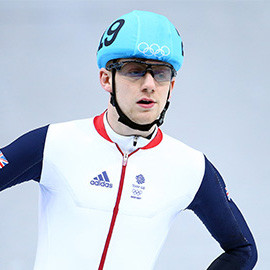 Adding to his gold medal, Jack’s other achievements include winning three silver medals at the World Junior Championships in Courmayeur, Italy and a 5000m relay bronze medal at the 2014 World Championships in Montreal, Canada. In 2014, he won a bronze World Cup medal with the men’s relay team.

Following this, in 2015, he became the men’s senior overall national champion at the British Short Track Championships. After such a successful career, it is no surprise that Jack is an expert in handling pressure, a skill which he shares with audiences.

First stepping onto the ice at six-years-old and joining the British junior team when he was just 14, Jack announced 10 years later – at the end of 2015 – that the 2018 Winter Olympics in Pyeongchang, Korea, could be his last. Telling the Nottingham Post that he wanted to “venture into other things in my life’,’ Jack can look back on his career as one in which he scaled the heights of success and overcame some massive challenges.

He has made a name for himself as a truly popular and powerful Olympic speaker on the circuit, due to the exciting stories he has to tell.