Tom Daley has become an icon of the diving scene, since he first took to the board aged seven. As an Olympic athlete, his 10-metre platform performances have set the standard in the sport, winning him a gold medal at Tokyo 2020, while Tom’s advocacy for LGBT+ rights have improved awareness for the community. Both in the pool and at events, Tom sends positive ripples of change throughout the lives of all who watch him perform, as he proves with every gold medal that inclusion is the way forward. When he is not entertaining crowds live, his ITV show, Splash, was a fan favourite amongst viewers.

Tom Daley
Tom Daley has become an icon of the diving scene, since he first took to the board aged seven. As an Olympic athlete, his 10-metre platform performances have set the standard in the sport, winning him a gold medal at Tok 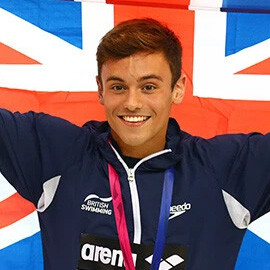 When Tom is on the diving board, his form and bold confidence is palpable. This, combined with his drive to succeed, makes up Tom’s winning mindset – a core topic of this sports speaker’s presentations. The Olympians’ continued hard work paid off in the years following, as he won two gold medals at the Commonwealth Games in 2010, and in 2012 earned his first Olympic medal, in the 10-metre Individual Platform diving competition. Tom later added to his 2012 bronze medal with another bronze in the 2016 Rio Olympic Games, a testament to his consistent power and performance. Tom's biggest achievement to date however, came in 2021. Tom won his first Olympic gold medal at the Tokyo 2020 Olympics, where he and his diving partner, Matty Lee, beat the Chinese competitors by 1.23 points and in the men's synchronised 10m platform.

Having won several gold medals throughout his career, Tom often discusses peak performance and maximising success at events. An inspiring and much-loved celebrity, Tom grew from adversity to become the speaker that he is today. From a victim of bullying to an Olympic champion, his stance on LGBT+ rights has been a driving force of positive change. When Tom announced in 2013 that he was gay, it kickstarted his venture into public advocacy, which resulted in open criticism of anti-gay laws, human rights violations, and the anti-gay mindset still prevalent in the UK.

As a speaker, Tom discusses the issues surrounding diversity and inclusion, he raises awareness of LGBT+ issues, and the importance of acceptance and understanding in the workplace. In celebration of Tom’s advocacy, he was awarded the 2017 British LGBT Independent Influencer Award. Throughout his career, this inspiring athlete has received many accolades - including being awarded the BBC Young Sports Personality of the Year award and The Herald Award for Sports Personality of the Year three times. He was also featured in Time magazine’s special Olympic Games edition, as one of the top 100 Olympic Athletes to Watch.