Josh Landmann is a talented para-athlete who has been no stranger to adversity throughout his life. Talented in the disciplines of para-triathlon and para-alpine slalom, Josh is both a determined and hard-working sportsman.

Josh Landmann
Josh Landmann is a talented para-athlete who has been no stranger to adversity throughout his life. Talented in the disciplines of para-triathlon and para-alpine slalom, Josh is both a determined and hard-working sportsm 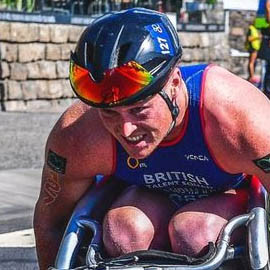 Josh’s life drastically changed after a holiday to Ibiza in 2014. He dived into the pool of his holiday accommodation and unfortunately hit his head on the bottom of the pool. Josh, fortunately, managed to get out of the pool but soon realised that he was left partially paralysed from the chest down. He had sustained a spinal cord injury after breaking his neck and doctors believed that he would not walk again. However, Josh defied the odds and after a series of surgeries and rehabilitation, he was, fortunately, able to regain some movement in his legs.

Before his injury, Josh was a very athletic person who enjoyed participating in sport. He did not let the adversity that faced him affect his love for sports and instead looked to pursue a para discipline. Josh found particular talent in sit-down skiing, after spending only 20 days learning the sport. His talent for skiing was ultimately proven when he competed at the Giant Slalom in 2017 and claimed the title of British Slalom Champion (LW12-1 Para-Alpine).

Alongside his talent for skiing, Josh also found that he excelled in the triathlon too. People were surprised that Josh would want to get back into swimming after his accident, however, he proved people wrong. He competed in the 2018 British Triathlon Championships, where he excelled in the swimming portion of the triathlon and claimed the bronze medal. Josh also managed to claim a Guinness World Record, completing the fastest marathon in a non-racing wheelchair with a time of 3 hours, 18 minutes and 59 seconds. Josh is determined to make the selection for the 2020 Tokyo Paralympic Games and has committed himself to a strict training regime. Another dream of Josh’s is to compete at the 2022 Winter Paralympic Games in Beijing, competing in his other beloved sport of sit-skiing.

Helping others affected by spinal cord injuries is one of Josh’s biggest passions, raising awareness and funding for a number of spinal injury charities. In a further bid to raise awareness of the injury, Josh appeared on The Ellen Show and also competed in a Tough Mudder race. The video of his Tough Mudder race went viral, hitting an impressive 45 million views. Recently Josh was appointed as an ambassador for the Spinal Injuries Association, where he delivers speeches and campaigns for others who have suffered from spinal cord injuries.

An inspiring and driven individual, Josh is the perfect candidate for an Olympic speaker at a range of corporate and sporting events. With the drive and determination to propel himself to bigger and better things, Josh is guaranteed to leave a lasting impression on any audience member.